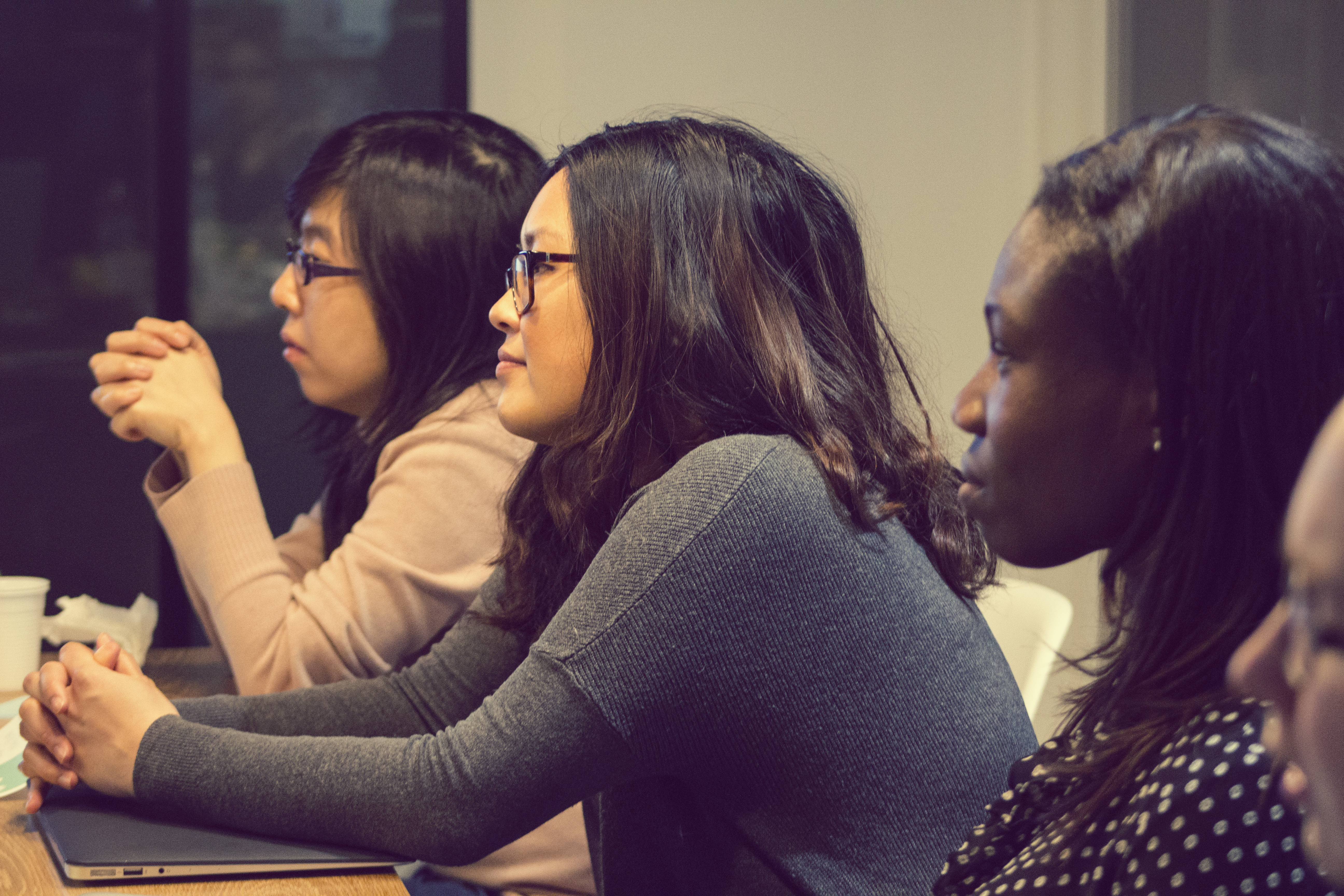 Women who code for social change


Established in 2015 Women Hack For Non-Profits26 (WHFNP) is a fast growing community of women that are looking to improve their coding, testing or design skills. What started out as a simple idea back in May 2015 by co-founders Nandhini Narasimhan and Vinita Rathi has been brought to life and grown to the wonderful community we have today. We are over 200 coders, designers, writers, project managers and testers working on projects that are personally rewarding and contribute to the society at large.

The software engineering sector is one of the fastest growing in the world but female representation is still rather low and there is an evident gender gap. With coding and design becoming necessary skills for shaping the future, it is important to encourage more women to enter the tech scene. By volunteering with Women Hack for Non-Profits, women can practice and grow the skills they require to help switch careers into the engineering sector, while working on real life projects and communicating with clients. As a group we help each other grow, boost self-confidence, share and exchange experiences, knowledge and best practices, and provide guidance at all levels. Starting from just a handful to over 200 volunteers, the group has grown in a very short period of time, which indicates the need for such a community.

Here at Women Hack for Non-Profits we believe that open-source is the way forward. Open source software comes with a licence for anyone to study, change, and distribute it to anyone and for any purpose. Open source has been at the core of innovation and it has contributed greatly to the technology we use today. The web today would not be the same without it and this makes it a main reason why we want to share the knowledge we have and will acquire as part of Women Hack for Non-Profits to contribute to the innovations the future may bring. It is our requirement that all the projects we undertake are open source with the code becoming available on Github for anyone to use, modify and contribute to.

We choose projects that are for a good cause. Volunteers can put project ideas forward to be worked on, but the majority of our projects are work that helps charities and Non-Profits. These range from simple websites, mobile apps, improving search engine optimisation, or a custom Content Management system that can help charities reach out to more people and promote their cause. Charities pitch these projects to volunteers during the monthly-organized events, after which volunteers self organize into teams and start work on them. We usually collaborate on Slack, Google Hangouts and during project meet ups in cafes around London. Everything is volunteer-led and none of this would be possible without the commitment, determination and time given by the volunteers. Organized by the volunteer board members of the organisation, we also have monthly workshops, talks, panels and project hack evenings. We have just begun work on two more projects, which bring us to 10 on-going projects to this day.

Creating a Community of Interest

Together we are working to create technology that can inform and educate, with a wide range of causes touching on issues such as living with a rare disease, overcoming OCD and acclimatising to foreign cultures and customs as a refugee. We hope to inspire many more women to come and join us so we can watch them grow, flourish and make a positive contribution to the community and non-profits that would otherwise not have the budget to create engaging and informative websites/content/apps that they so urgently require to reach more people to further their cause. At the same time we create an environment which constantly offers support and educates women in coding by holding workshops on learning coding languages such as Ruby, Python as well as UX design, HTML, CSS and Github to name but a few.

Our work has gained recognition among the non-profit sector and we have partnered with organisations such as Women Who Code, Code First Girls, AcornHack:Girls, and Empowerhack among many other similar organisations. We hope to continue growing our outreach and impact on social/civic causes by organising hackathons and more panels similar to the Women’s Day Parity panel organized by the volunteers this year. Panel for Parity touched on issues such as inequality, minority representation and challenges many women face in the technology sector. With this outreach and the growing number of projects we undertake we are starting to gain momentum and starting to make a difference.

Some of Our Projects

Over two years ago the garment factory Rana Plaza in Dhaka, Bangladesh collapsed taking the lives of over one thousand people and injuring over two thousand more. From this tragedy Fashion Revolution charity was born to raise awareness of worker wellbeing and conditions in work places around the world. Every year during Fashion Revolution Week in April, the charity urges their followers on social media to wear their clothes inside out and take pictures of their clothes labels. All this in the hopes of raising awareness and understanding of where each garment is made and what kind of conditions the workers making it may be working in. Women Hack for Non-Profits worked closely with Marianne Hughes to define requirements for a web app that would allow the charity to reach out to global followers and collect all submissions in one place. With a deadline only two weeks away this has been an incredible and exciting challenge. We designed and developed a web app which aggregated all images from people’s tweets of their clothes’ labels and displayed them in real time on what is called a Twitter Wall. The tweets used the Twitter hashtag #fashrevwall. The app is live on fashrevwall.com and is still accepting submissions. In such a short time we designed, planned and built the full app with very little prior experience of the technology used for this and with only four volunteers.

Erehwon project27 is a collaborative research project started at Queen Mary University of London that investigates well designed digital tools, free from corporate interests and social media noise, which assist those engaged in socio-political interventions in the public space (physical or digital), who through their imaginative and creative practices contribute to new narratives of change and help build a more fair, free and participatory society.

Mariza Dima, a WHFNP member and Human Computer Interaction designer is a co-creator of the project. After almost two years of online research, guerrilla-ethnographic studies and many workshops across Europe, the project is currently at the first development stage of a prototype online tool. Together with three volunteers from the community (two front-end developers, one graphic designer) we created the alpha prototype over a hackathon during the last weekend of May 2016. The source code is available at Github and there is a list of the tasks needed to take the prototype to the second stage. The WHFNP community has been invited to work at a volunteering basis towards this next step. This would be an excellent example of community-driven change and support in collaboration with University research projects and in light of growing funding cuts for arts and humanities research.

We like to view WHFNP as an ecosystem that is driven by creative collaborations, collective creativity, and diverse approaches to engineering and project management combined with a strong wish for social change. New members who join WHFNP encounter a lively non-hierarchical community which warmly welcomes new members, aspires to connect with each other, work with and learn from different disciplines, is enthusiastic about creating tools and often inventing new concepts, and has a vision to help drive social change. Collaboration, creativity, and self-motivation are the pillars of how we work. These characteristics are partly the reason for the fast growth of the group whose members proudly promote the work they do and the community ethos. We have women applying daily to become volunteers. It is with this vision and tools that we hope to make our contribution towards minimising the gender gap and helping shape a better society at the same time.

A new, a vast, and a powerful language is developed for the future use of analysis, in which to wield its truths so that these may become of more speedy and accurate practical application for the purposes of mankind than the means hitherto in our possession have rendered possible. Thus not only the mental and the material, but the theoretical and the practical in the mathematical world, are brought into more intimate and effective connexion with each other. We are not aware of its being on record that anything partaking in the nature of what is so well designated the Analytical Engine has been hitherto proposed, or even thought of, as a practical possibility, any more than the idea of a thinking or of a reasoning machine.